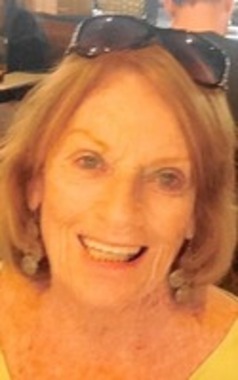 Back to Mary Anne's story

Amesbury - Mrs. Mary Anne (Callahan) (Doherty) Sullivan 82, of Amesbury, formerly a 40-year resident of Salisbury Beach went to heaven on December 9, 2019 at the Meadows in North Andover after a 3-year battle with Melanoma.

She was the beloved wife of 59 years of J. Nicholas Sullivan. Mary Anne and Nick were married on March 13, 1960 at St. Augustine's church in Andover. She was raised in Andover, attended Andover Public Schools, was a graduate of St. Mary's High School, Class of 1955 and the Katharine Gibbs School.

She was employed for many years by the former Bon Secours Hospital in Methuen and later worked in the office of Charles Ellis M.D. in Andover.

She travelled extensively with Nick going on dozens of cruises throughout the Caribbean as well as one though the Panama Canal. Some of her favorite trips included Ireland, Rome and Vatican City, Las Vegas and numerous visits to Foxwoods. During her retirement she spent many happy winters in Cape Coral, Florida.

Mary Anne loved her 11 grandchildren, a very dry martini, Keno, scratch tickets, daily Mass and a good bargain; she scoured the aisles of Marshall's, TJ Maxx and the Kittery Outlets often with her daughter Tara in tow. She was looking forward to the birth of her first great-granddaughter in the spring.

Additionally, she is survived by her lifelong friends David and Joyce Mitchell of Atkinson, N.H., and their children: Barbara, Mary, Katie, Susan and Andrea and their families; and her former daughter-in-law, Jane Sullivan and her fiancé Phillip Murphy. She is also survived by her good friends, Beverly Vaughn, Helene Murphy, Bob Mannix, and Betty Connell; as well as three generations of nieces and nephews.

Mary Anne was a longtime communicant of Star of the Sea Church in Salisbury, and more recently at Holy Family Parish in Amesbury.
Her funeral Mass will be held in the Holy Family Parish, 2 School St., Amesbury, Saturday, Dec. 14, at 10 a.m. Relatives and friends are invited to arrive directly at church to celebrate her life. Visiting hours in the Paul C. Rogers Family Funeral Home, 2 Hillside Ave., Amesbury, Friday, Dec. 13, from 5 to 8 p.m. Interment will be privately held. In lieu of flowers, expressions of sympathy may be made in Mary Anne's memory to St Vincent De Paul Society, at Holy Family Parish, 11 Sparhawk St., Amesbury, MA 01913, or to St Jude Children's Hospital, 50 St. Jude Pl., Memphis, TN 38105. To share a memory or offer a condolence, please visit www.paulcrogers.com.
Published on December 11, 2019
To plant a tree in memory of Mary Anne (Callahan) (Doherty) Sullivan, please visit Tribute Store.

Plant a tree in memory
of Mary Anne

A place to share condolences and memories.
The guestbook expires on June 07, 2020.

Jeanette Ganimy Caux
I wish to send my sincerest condolences for the loss of your beloved Mary Ann.
We were classmates at St. Mary' s High and graduated in 1955.
I have very fond memories of those days. Sorry.
Craig Tedeschi & Katherine Walsh

To the Sullivan Family.. Our thoughts and sympathy are with you at this sad time. Her smile, her spirit, and her goodness will remain alive in the hearts of everyone who knew her.....

Joyce Peters Healey
To Nick and the entire Sullivan Family,
Please accept my sincere heartfelt expression of sympathy of the loss of Mary Anne.
My sister Laura Peters was a good friend of MaryAnne’s.
My sister Laura, Cathy Ford and Mary Anne frequented Bishops in Lawrence as a trio!
Also had many fun times at Butch’s in Salisbury Beach.
May she Rest In Peace!
My sister Laura passed in 1979 at the age of 44.
Bill & San McGurren
Tom & Leslie,
These words of deepest sympathy are sent with hope that, as time goes by, cherished memories will help bring you inner peace and make your beloved Mary Anne seem still close to you.
Our sincere sympathy,
Bob Tedeschi & Judy Tedeschi
We are so very sorry to hear about your loss.
Brian MacKenna-Rice
Kelly, my sincere and respectful condolences. Hoping you will be comforted by the warmest memories of your mother. Brian M-R
DOLLY & FRANK SULLIVAN
To Nick... and to all those others whom Mary Anne loved and left behind... We are deeply saddened by your loss. We have many fond memories of our times with Nick & Mary Anne both in Salisbury and in Cape Coral... Mary Anne was a good soul and a fun loving person to be around. We have a particular glass that we always made a cosmopolitan for Mary Anne when she was here. Tonight we will use that glass to toast to her memory... Good memories, good times remembered... May those memories carry all of you through these difficult times. Please accept our sincerest sympathy.
View all